“When a man marries a woman, they become one—the trouble starts when they try to decide which one.”

In Mixed Doubles (which I adore playing - sorry, Marco), what I prefer is when the woman admires my boules and starts fondling them. As soon as she does that, I’m immedi­ately straight. And the more she admires them, the straighter I am! Some­times she tells me off, for being too long… and I reply, “What do you expect, the terrain is so slippery!” With a woman, I love to shoot. Often we’ll swap positions, usually when we get to 6-9. And then she’s telling me off I again, I’ve shot too quickly! I must learn to control myself, to take more time. It seems like the instinc­tive shooters do exist, after all!

The hardest thing, with women, is to be on target—but it’s so small! And on a slope. Sometimes you succeed, sometimes you’re to one side… and that can frustrate your partner! Rather than criticise, she could try and help and show me the right line. She could also push my boules a bit closer… but no, she doesn’t like to, so I’m obliged to enter from behind.

The bloody umpire’s signalling that I’m only allowed to fill in one hole!

OK, only one hole—but you can choose which one you want! Sometimes, if I’m not playing strictly by the rules, I like to fill two! I know… naughty. 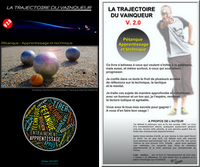